This article is for those who for some reason are unacceptable natural way of conception.

Here you should immediately make a note. This is by no means a propaganda of such a method.
On the contrary, it is best to do artificial intrauterine insemination in a special clinic. There is certain medical equipment and better compliance with all the rules of this process.
But regardless of this advice, there are still many who wish to do this at home. Often this is because there is no desire to show off officially, the stress that can be experienced in the clinic plays a role, as well as the cost and, in general, it seems too troublesome to organize a joint trip to the clinic, and not just one, but with a partner.
This can be compared to how girls and boys are taught in school about the undesirability of early sexual intercourse. But at the same time, just in case, they are told about contraceptives, knowing that many will still do their own thing.
Here we will do it in the same way: we warn about the undesirability of home insemination, but just in case we will consider it, in the sense that if there are those who decide to do this, it will be more reasonable to show how to do this correctly and safely. 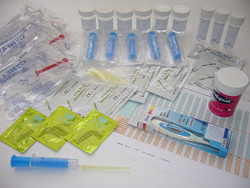 To complete the procedure, you need a sterile 10 ml syringe without a needle and preferably with a catheter.
It is best to purchase a complete kit, which, in addition to the syringe, will also include tests to determine FSH, LH, and hCG.
One of the options for such a set is shown in the figure.
You need to understand that, unlike the clinic, you cannot prepare sperm yourself - to produce the so-called “washing”, separating unnecessary impurities and mixing with useful additives.
Although this procedure is not a prerequisite for conception, it serves to ensure that with a sharp infusion of sperm there are no painful cramps of the uterus. Therefore, it is necessary to inject in a smooth motion, imitating the natural process.
But, before describing the procedure itself, we consider the preparatory phase, namely, conducting tests using this or a similar set.
1. Test showing the level of FSH (follicle-stimulating hormone).
The main goal of this test is to more accurately identify the onset of the menopause.
Doing such test is recommended for women aged 30 and older, in whom the menstrual cycle occurs regularly.
The test for the level of FSH consists of two parts and allows you to show the concentration of FSH from 25 mm per ml.
If there are problems in the reproductive organs, the test may give a false result.

The test is carried out twice with an interval of seven days. At the same time, the day of menstruation is not taken into account.
Drink less liquid the night before the test. In the morning, collect urine in a clean and dry vessel.
Then do the following.
Pull the test strip out of the packaging immediately before use. Then, dip the strip into the urine with the down arrows and hold it there for 10 seconds, while the urine level should not exceed the maximum level marked "MAX".
Next, lay it on a clean and dry surface and wait another 5 minutes.
The result can be estimated already starting from the 40th second and in 15 minutes the final picture will appear.
During the test, you can see various strips of different colors - it all depends on the level of FSH in the urine.

A positive result is considered if the control line matches the color or is lighter than the reference line. But, as mentioned above, it is necessary to do a second test in a week.
An increase in FSH levels for a short time in the middle of the menstrual cycle is normal, but a prolonged increase in hormone concentration indicates the onset of menopause or difficulty conceiving.
If, at the same time, you often began to feel fever, fatigue, irritability, and an irregular menstrual cycle is also observed, then this once again confirms the onset of menopause. In this situation, you can not do without the help of a gynecologist.

The result is considered negative at normal FSH levels.

In these cases, the study is repeated using a second test strip.

2. Test for the determination of ovulation. This test is in many ways similar to the first.
Also held twice with a period of 7 days. The same rules for collecting urine and the same action is carried out with a test strip.
Also dip a strip in the urine for 10-15 seconds and watch for the mark of the maximum level of "MAX". The result is visible in the period from 40 seconds to 30 minutes.
If the control line is the same color or lighter than the reference line, then you have a positive result.
If after 30 minutes this does not happen, then negative.

Artificial insemination is carried out 2-3 days before the onset of ovulation and then it must be repeated two to three times every two days.
We give an example.
Suppose, with a 28-day menstrual cycle, ovulation occurs on the 14th day.
And then, if you decide to conduct AI three times, then plan it on the 11th, 13th and 15th day. If twice, then on the 12th and 14th day.

3. The process of artificial insemination.
So, the necessary tests have been carried out, day “x” has been appointed and now a man is joining the case. He needs to refrain from ejaculation from 3 to 7 days.
If a man does not have a permanent partner, then it is recommended that 5 days deliberately do a "fake” ejaculation. If there is a partner, then, accordingly, sexual intercourse. This is necessary in order for the sperm to be optimally prepared - neither stagnant, nor, conversely, depleted.
It is advisable that in the last 3 months a man leads a healthy lifestyle.
A special container is taken from the set, the man retires, and a calm atmosphere is important here so that the same excitement occurs as during a normal sexual intercourse. This will allow to stand out everything you need as an ejaculate, which should have stood out in a normal act.
Next, wait about 15 minutes to liquefy sperm. At the same time, it is advisable to wrap the container in cotton or cloth for this time so that the sperm does not become completely cold, which will lead to further unpleasant sensations. The maximum period after which sperm loses its quality is 2 hours from the moment of ejaculation.

Take a syringe from which air must be removed. Pull the syringe plunger up 2 mm. Do not use grease, as it can damage sperm.
After liquefaction, the most valuable part of the sperm settles to the bottom, so when collecting sperm, try to take the upper layers first and then from the bottom.
Then insert the syringe into the vagina and gently press the plunger so that the sperm enters the vaginal cavity at a uniform rate, as occurs during normal intercourse. During the procedure and about half an hour after the procedure, the pelvis should be in a raised state, for this you can, for example, use a pillow.
After the introduction of sperm, it is advisable to experience an orgasm, since during orgasm, the walls of the vagina contract, which helps the movement of sperm.

4. Some nuances associated with different sets.
If the kit has a mirror, then insert it into the vagina. Start slowly opening the mirror about two to three centimeters. Lock the mirror in this position.
If the kit has an extension cord, then it is attached to the syringe and inserted into the vagina. The tip of the extension cord should not be too close in the cervix - this will avoid damage during the procedure. Press the piston slowly.
Release sperm at the base of the cervix, but do not try to release sperm directly onto the cervix, as this can sometimes lead to cervical shock. Close the mirror slowly and remove it from the vagina.
Some kits instead of a syringe include cervical caps or cervical caps with tubes.
With a cervical cap, sperm is deposited in the cap, and then introduced vaginally. You need to hold the cap for about four to six hours,to give sperm enough time for fertilization.


to search for a partner

To view profiles, you must register or log in to the site under your name

To follow the link, you must register or enter the site under your name

Enter the email address you were registered under

There are no photos in your profile

With a photo, you will have a better chance, because when searching, users often check the box "search with photo".
Photos are uploaded on the download page
Your images are not visible to everyone, but only to those who have Premium membership.

Your profile does not have a region of residence

If you want to activate again, please open your profile page.
at the very bottom and click the activation button.